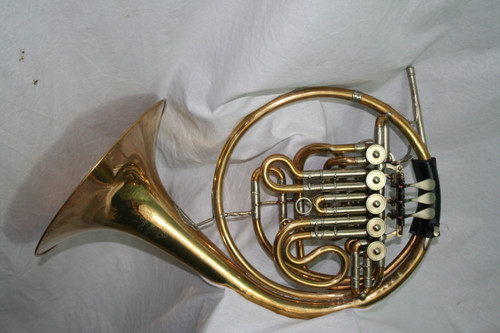 If you find yourself simply too cool for an original Geyer horn, you could go with a horn designed by Carl Geyer's boss, Richard Wunderlich!  Geyer was a repairman in Europe in the year 1903, and responded to an ad from Wunderlich to work in his shop Chicago. Geyer emigrated to the US one year later, and the two ran the shop until 1916, when Wunderlich retired and Geyer took over.

The horn sits in B flat and has two thumb valves: one for the compensating F side and the other as a stopping valve. The linkage on the valve levers is mechanical (similar to an Alexander) and compression sits at about 3.0. It is made of a lacquered gold brass (it could technically be considered a dark yellow brass too...) and the bell is non-detachable. The horn comes with a leather hand strap and a hard fixed bell horn case.