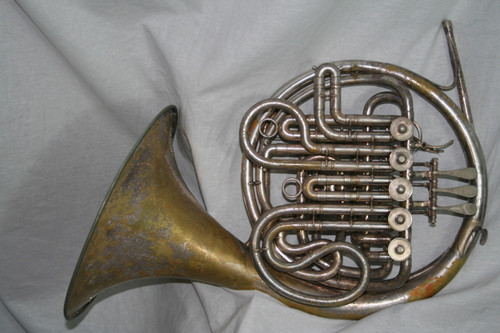 This Hoyer double horn is a unique one, and doesn't have a dent on it! The most apparent trait it has would be the fading silver plating on it, which is in no way damaging to the instrument but your hands may glimmer with silver flakes after playing for a bit. The fixed bell is adorned with a garland and the original engraving is still very visible on the bell tail. There has been some patch work done on the instrument but it still plays well. An Amado water key has been installed on the leadpipe as well.

The horn would be considered a Geyer wrap because of the change valve being on the opposite side of the change valve lever, but aside from that this horn is unique. There is an additional thumb valve that can give you a couple of different keys. Because the slides for this valve include "extenders" on both the F and B flat slides, you have the option of having the valve change the key to E or E flat (for F side), as well as A or A flat (for B flat side). The compression sits pretty high as it is an older horn. Comes with a green Osmun MB2 style horn case (with a velcro music pouch on the side).