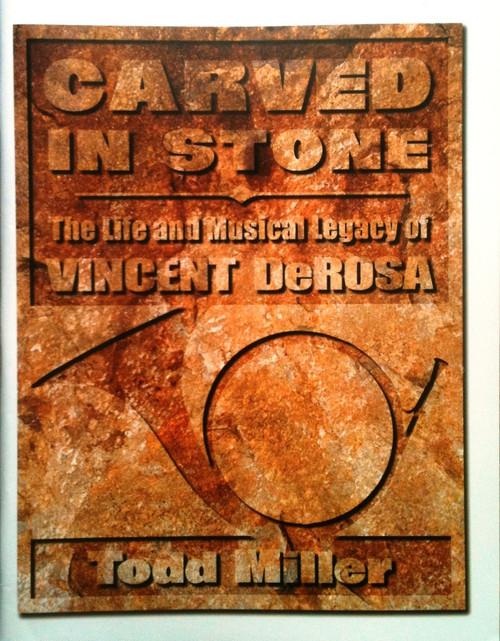 Carved in Stone: The LIfe and Musical Legacy of Vincent DeRosa, the Most Recorded Horn Player.

Carved In Stone documents the life, career, and playing and teaching techniques of horn player Vincent DeRosa, the world-renowned recording artist. DeRosa has had an astounding career that spans seven decades. He is undoubtedly the most recorded horn player ever, as well as one of the most respected.

The book is divided into four sections:

• A review of DeRosa’s personal life.
• DeRosa’s career (including a historical perspective of the
Los Angeles recording industry and his impact and
influence on it).
• A concise and direct description and analysis of his playing
and teaching  methods including insights into both technique and          musicianship.
• Appendices, exercises, and photographs

This book is the result of a number of years of research including over 60 interviews with DeRosa, his colleagues, and former students, as well as numerous print resources. It should provide invaluable information to all brass instrumentalists, not just horn players.

Carved in Stone is an extraordinary and well-deserved tribute to Vincent DeRosa and his contributions to the music world.

A Note About the Author:

Todd Miller has been active in the Los Angeles music industry for over fourty years. He is one of the founding members of the Pacific Symphony in Orange County, California, as well as the Los Angeles Opera Orchestra. Miller is also a member of the Pasadena Sympohny and the Hollywood Bowl Orchestra, and has performed in many other Los Angeles symphonic venues and organizations including the Los Angeles Philharmonic, ballet, and Broadway shows. He has worked in every area of the recording and studio industries, including film, television, recordings, and jingles.

He received his Bachelor and Master of Music degress from the University of Southern California. Miller has been on the music faculty at California State University, Fullerton since 1971, where he serves as Professor of Music.

He has been very fortunate in that his career has spanned three generations of Los Angeles musicians; he has worked with and learned from some of the finest performers in the world.