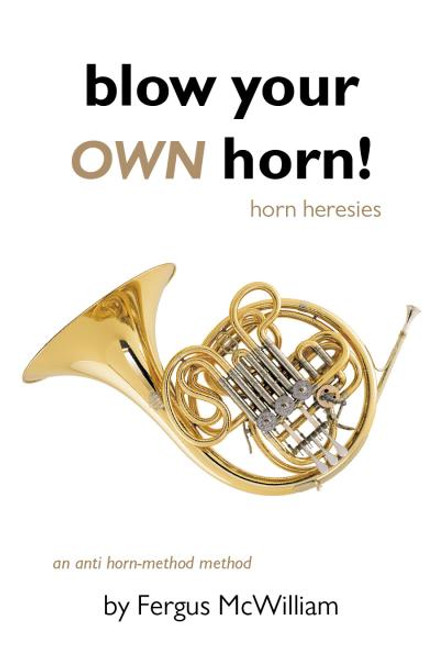 Fergus McWilliam also is an internationally esteemed and sought-after teacher. He continues to give master classes at leading music schools in many countries, including the Berlin Philharmonic Orchestra Academy, the Hans-Eisler Musikhochschule in Berlin, the Royal Academy of Music and the Guildhall School in London, the Paris Conservatoire, the Tokyo University of Fine Arts, the Royal Scottish Academy of Music and Drama in Glasgow, the Venezuela Youth Music programme and more.

Blow your Own Horn is Fergus McWilliams Û÷takeÛª on horn playing and more generally on music education. Written in a very spirited style, the book covers all aspects of playing and the profession, including, practical elements such as: auditions, embouchure, breathing, and exercises. In addition, McWilliam explores topics such as: mind games, attitude, strategies, relativity, under pressure, why do we need teachers and much more! Blow your Own Horn is indispensible for anyone who has a fascination with the musical world, both professionals and amateurs.

MB3 and MB3 w/Room For Mute