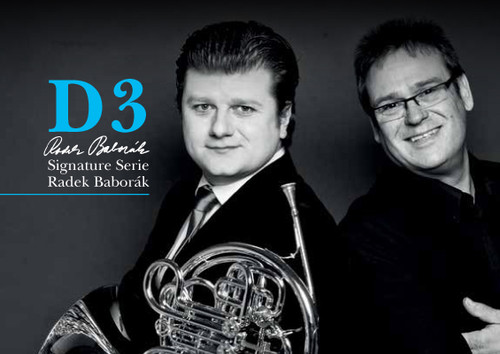 Dürk Horns and Radek Baborak are joining forces to take horn building and design to a new level. Individually configured, tested by one of the best horn players in the world and deemed excellent, certified and autographed "who wouldn't be proud to own such a horn?"

Radek Baborak began to play the horn at the age of 8 and only 4 years later won the Radio Concertino Praga Competition. After playing with a number of orchestras in his native Czech Republic, he came to Germany, where he has held the solo horn position with such renowned orchestras as the Munich Philharmonic and the Berlin Philharmonic. He has also appeared as a soloist with the London Philharmonic, the Mozarteum, and the NHK Symphony Orchestra in Tokyo, just to name a few.

Dietmar Dürk's motto has always been, "For us, good is simply not good enough." After completing his apprenticeship at the Musik Alexander company in Mainz, he passed his Master Craftsman exams with honors thus fulfilling the requirements for opening his own brass instrument workshop. In 1999 he channelled his passion into producing his own line of horns and within no time the name Dürk Horns became synonymous worldwide with quality, service, and precision craftsmanship.

When testing Dietmar Dürk's horns last year, Baborak found the D3 particularly to his liking. "With this instrument, I could play a concert immediately, even tonight," he declared in amazement. Similar to the principal of the Viennese F horn, D3 components are individually selected to complement each other perfectly. Baborak tested several different lead pipes, corpuses and bells until he had chosen the parts to put together his ideal horn. He loved the idea of testing and evaluating different combinations of components in real time and then assembling them according to his own unique taste and style. And thus the Dürk Horns Radek Baborak Signature Series was born.

Each Dürk D3 is individually manufactured and configured. All conical parts, including the lead pipe, handhammered bell and specially treated bell tail, are constructed from folded sheet metal with uniform wall thickness for evenness of overtones and response. It is the density of material achieved by hand hammering that above all has such a great effect on the tone quality and immediacy of response. Baborak collaborates with Dürk to configure each Signature Series horn, personally testing it for ease of playing, intonation, response, timbre, resistance and projection, and instilling it with a bit of his own essence. The horn is then certified, enhanced with an extended, even more comprehensive Dürk Horns Service Pass, and engraved with Radek Baborak's own signature.

"have total confidence in this collaboration," said Radek Baborak of his venture with Dietmar Dürk. "Both of us will learn and profit a lot from our work together, and not only the two of us, but all horn players worldwide who will have the opportunity to play these horns!"

Click HERE to read the interview with Mr. Baborak.