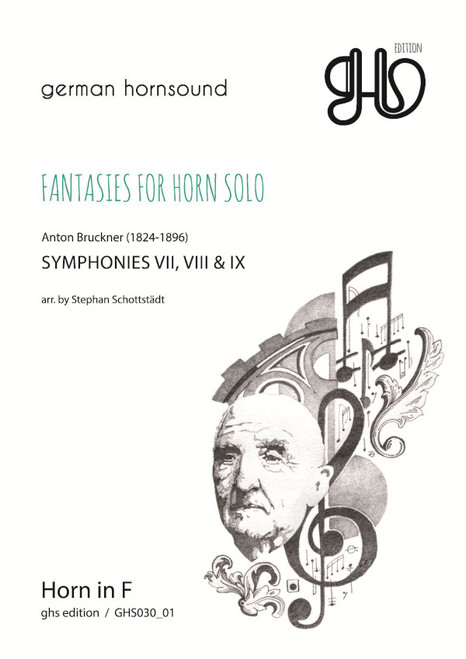 Fantasies for solo horn
The idea for the fantasies for horn solo came to the
musicians at german hornsound during the period
of exit restrictions due to the Corona
crisis in spring 2020. The
performance of our orchestras and
all other cultural institutions, which was
planned, was suspended within a few days Chamber music concerts with german
hornsound for an indefinite length of time
provoked unusual mind games in order not
to sink into the aimless swamp of doing nothing.
Since the political guidelines
forbade even trying out in small line-ups, the only
option left was to play alone. And of course that
Opportunity to get creative at your desk.
So why not combine the two?
The present volumes with fantasies about pieces
from orchestral literature are intended to be an addition to the
many existing etudes for horn players
. Playing etudes on a daily basis is essential
for all brass players in order to practice basics and
technical parameters. The
Fantasias are technically demanding pieces
because they combine parts of the parts originally
intended by the composer for horn with new elements
from other instruments and groups of instruments
. This creates a kind of orchestral study,
which allows you to get to know the pieces even better
and allows
you to look beyond normal horn blowing. This
results in exercises on the musical
styles of individual composers and works, especially in
terms of impetus, articulation and sound. So
you can learn independently and
automate what you have learned . Last but not least, the
fantasies should of course give every horn player above all fun
and joy!
About the present volume: Bruckner's last three
symphonies for horn solo
Everyone who loves the horn will sooner or later
come into contact with Anton Bruckner's symphonies.
For me it was the time of the state youth orchestra
or gave the impulse to a trombonist, who from his room
constantly sounded the whole
hallway with a Celibidache recording of the eighth
symphony through boxes he had brought with him .
From then on , when I became curious, I not only listened to Wagner
and Strauss, but also began
to
deal with Bruckner's fascinating, large-scale musical architectures . It may seem all the more presumptuous at first to want to reduce
such works to just one instrument
.
So I thought about it and, due to its
varied vocal passages , I first came across
Bruckner's Seventh
Symphony, which had been played shortly before . Although you are a horn player in the
Rows of wind instruments certainly cannot complain that
the composer was at a disadvantage here, as
numerous cantilenas remained in the ear, which, for example
, often exactly corresponded to the horn position in the cello
, but regardless of this
reverberated unplayed in our rows. After the seventh
, the no less impressive
symphonies VIII and IX were of course allowed . not missing and so
a first small cycle was created. Although Bruckner's music is
strongly harmonious and the sometimes
exuberant masses of sound in the tutti passages make
a large number of musicians
appear compulsory , so a corresponding one

It seemed difficult to reproduce with just one melody instrument , so I dared to
try it.

Fantasies for Horn solo
In the Spring of 2020 during the imposed
restrictions of movement during the corona
pandemic, we came up with the idea for the
Fantasies for Horn solo. Almost overnight our
orchestra's performance schedule ground to a
halt indefinitely, along with all other cultural
institutions, not least our german hornsound
chamber music concerts, provoking thoughts of
how not to sink into the oncoming swamp of
enforced inactivity.
The political demands for social distancing made
even small group rehearsals impossible, the only
solution being to play alone, or become
immersed in creative activity. Why not combine
the two?
The following volumes of Fantasies taken from
orchestral works present an addition to the many
etudes for horn already available. The daily
practice of etudes is fundamental for all brass
players wishing to maintain and improve their
technique. The Fantasies are technically
demanding as they combine original passages
from the orchestral repertoire for horn with new
elements originating from other instruments and
sections. The result is a form of orchestral study
enabling a better and broader knowledge of the
pieces beyond the passages for horn. They are
an exercise in different musical styles as well as
addressing different types of attack, articulation
and sound. The horn player can learn
independently and become proficient with
practice. Finally, these fantasies are intended to
give great pleasure and enjoyment to the player.
Regarding the present volume: Bruckner's
last three Symphonies for Horn Solo
Sooner or later everyone who loves the sound of
the horn will come into contact with the
symphonies of Anton Bruckner. My first
encounter with Bruckner was during a Youth
Orchestra Project. Everyone on our corridor was
subjected to Celibidache's interpretation of the 8th
Symphony blasting out from a trombone players
room on his own speakers.
My curiosity aroused, from then on I didnt just
listen to Strauss and Wagner but started to
explore the fascinating world of Bruckner's grand
musical architecture. In the light of this it may
seem presumptuous even considering reducing
these grand works to one voice. My thoughts
then turned to Bruckner's 7th Symphony because
of its many beautiful cantilena passages.
Not wishing to seem ungrateful in Bruckner's
treatment of the horn as a wind instrument it still
remains a fact that many of those beautiful
cantilena passages, for example those assigned
to the cellos, despite being in the same range,
are not echoed in the horns. Having dealt with
the 7th, the equally impressive 8th and 9th
Symphonies were added completing a first small
cycle. Despite the strong harmonies dominating
Bruckner's Symphonies and the overwhelming
mass of sound in the tutti passages making a
large number of musicians obligatory, I still
decided to attempt the seemingly impossible task
of providing a melodic version for one instrument.

german hornsound
Founded by four graduates of the French horn
class of Christian Lampert at the State University
of Music and the Performing Arts Stuttgart,
german hornsound has earned a strong
international reputation based on its exceptional
profile and has made guest appearances at
nearly all music festivals in German-speaking
Europe over the past years. The ensembles
repertoire spans all the periods of music history.
One of the ensembles goals is not only to work
on original horn quartet literature but also to
arrange works they like.
german

Joplin, Scott - A Breeze from Alabama