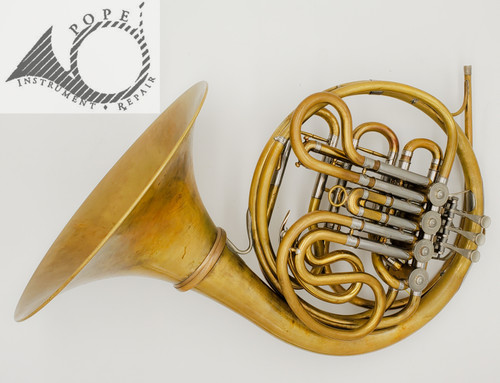 If you know - you know!  Horns made by Jerry Lechniuk are both RARE, and hugely sought after by professionals.  Jerry worked with Carl Geyer for about 10 years.  When he left Carl's shop he made his own horns - but fewer than 30 of them!
This one is in stunning condition.  The compression is almost perfect (0.2)!.  It is made of unlacquered yellow brass and has a few minor dings. There are NO areas of red rot anywhere and other than a protective guard by the thumb, there are not thin spots or patches.  An Amado waterkey has been added as has a Ron Pinc style flipper (the original fingerhook is included in the case).  Just cleaned - ready to be played in any major orchestra.  This horn has only had 2 previous owners.  Professionally owned and maintained.
Paxman fixed bell fiberglass case included.